I took up photography in mid-2002 at the ripe age of 65. My first camera was a 2 MP Olympus point & shoot. The first year was spent learning the difference between f-stops and bus-stops while shooting ~20,000 images. In December 2003 I joined a photo club and began three years of competing:

Each year I won every top prize and moved up a competitive-level notch. I quit after my 3rd end-of-year club competition (~300 club members who entered over 2,000 entries over the course over the competition year), taking home 11 awards in 2006 including the top 4. Going out on top seemed the way to go (plus, I was tired of shooting for judges, most of whom allowed no room for imagination & creativity, i.e. for Ed’s-Eyes).

IN THE END, IT’S JUST STUFF TO FILL A DRAWER 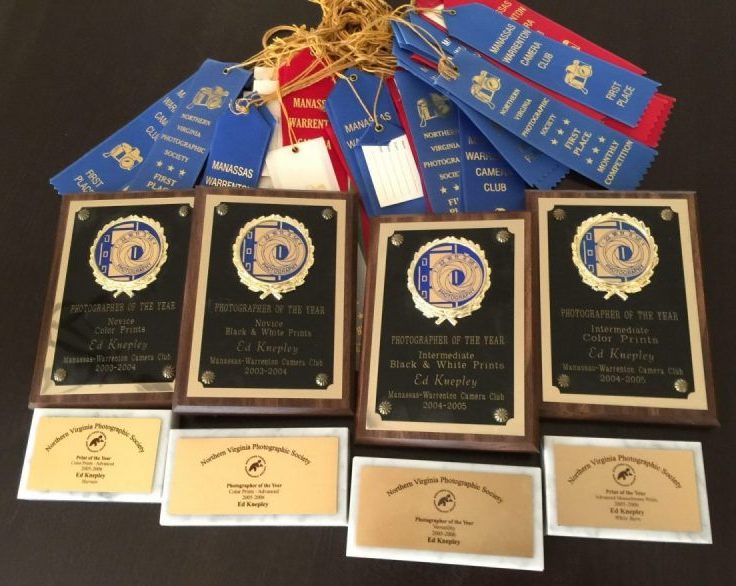 After competing, I moved on to teaching and presenting programs to clubs. My work was displayed in books and magazine covers and hangs in public and private collections. My favorite endeavor, though, was working as a volunteer photographer for the National Park Service at Shenandoah National Park where I donated thousands of photos.

I’ve been posting photos to the web since 2004, a little over a year after I took up photography in mid-2002. I first used PBase and posted a photo-a-day there for years. No new photos have been added for ~5 years, but the several thousand still there are worth a look. I tried a few other sites over the same period – SmugMug, Flickr, and others – but they’re gone now.

In 2010 I developed my own photo website, Photography Improvement. This was in response to requests from my community’s photo club for a photo course. As of Nov. 2018 I still post there (~2,600 posts, ~900K+ site visits from almost 200 countries, and nearly a thousand followers). I developed a few other sites since, but they also are gone.

That brings us here to thru-ed’s-eyes.